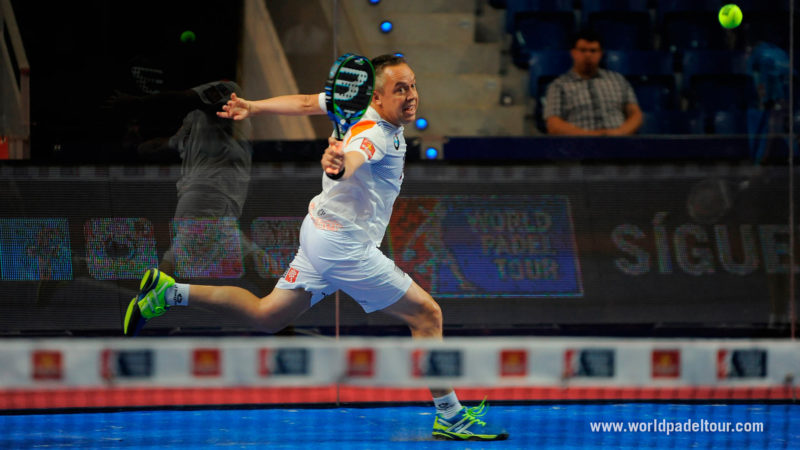 What we need to ensure before a padel match is that we have an optimal reserve of glycogen. The process is known as carb-loading. Glycogen reserves are the body’s reserves of carbohydrates, and they will help us maintain our energy levels for the duration of the match.

Athletes engaged in exercise over a long period of time produce energy via two mechanisms, both facilitated by oxygen:

When you run out of glycogen during a match you hit “the wall.” Your body has to slow down as it turns fat into energy, and this can lead to weak legs and fainting sensations. That is why we need to make sure to take care of our glycogen levels.

For breakfast tortillas, oatmeal, bread, pancakes, waffles, bagels, yogurt, and juice are all easy-to-digest options. Many fruits are high in carbs but are also high in fiber—and too much can cause stomach trouble mid-match. Bananas are a low-fiber choice and you can peel apples, peaches, and pears to reduce their fiber content.

The main meal before the match should be taken around 2-4 hours before, and we should eat carb-based food with a high glycemic index. Having a high glycemic index means that the carbs are rapidly absorbed.  Carbohydrates are key with a moderate amount of protein, adding in some antioxidants if possible.

Try a pasta/rice dish with some lean ground turkey meat sauce, or a chicken stir-fry with lots of rice and veggies. We should be looking at between 1 and 4g of carbs for every kg of body weight, eaten 3-4 hours before the match. In the hour preceding the match, if we haven’t yet taken our full ingestion of carbs, or simply feel hungry, we can eat 30-60g of carbs. If we ate more than that, we would be risking going in with a heavy stomach that will impair our performance.

Some typical snacks for pre-match are Gatorade Energy Chews and PowerBar Energy Blasts or simply fruit.

Keep in mind that it is also very important to stay well hydrated throughout the day of your match. Monitor urine color on game day. It sounds silly, but you want it in the light lemonade or even clear shade. If you get into the apple juice shades, hydration levels are lacking.

What to Avoid Before Matches

How you fuel your body before a game or practice can still have major performance benefits. Here are some items to avoid eating as part of a pregame meal.

What to Eat After a Padel Match

After an intense workout such as padel training or a padel match, there’s an exercise recovery phase of two to three hours during which you have to be somewhat careful about what foods you choose to eat.

Specifically, in order to promote HGH release, you do need to restrict sugar intake post-exercise (although carbs can benefit those more interested in fast recovery, such as professional athletes). Fitness veteran Phil Campbell explains:

“What we recommend… is to get 25 grams of protein afterwards within that 30-minute golden window. There is a lot of research to support that, but there’s also some research done by Dr. John Ivy of the University of Texas, a great researcher on a young cyclist who made recovery. They’re not looking at growth hormone or maximizing growth hormone. They’re trying to get to recover as quickly as possible so they can cycle several days in a row.

They showed that getting a ratio of 4:1 carbs to protein is better for recovery… 4:1 starts recovery faster. If you’re going after recovery, that’s the best strategy… [if] you’re not looking for growth hormone, that is.

But on the other side, if your goal like most middle-aged adults and older is to maximize growth hormone, and to get this wonderful hormone circulating for that full two hours in the surging window for going after body fat (just about like you’re doing cardio for two hours), you can do that. …if you throw too many carbohydrates in… then that releases the hormones called somatostatin. That, for whatever reason, just shuts down growth hormone. That’s clear in the research.”

So it’s important to avoid carbs, especially sugar or fructose-containing foods, in the two hours after your workout, and this includes sports drinks, to be sure you’re getting the full HGH benefits.

Consuming whey protein, however, appears to be nearly ideal, as it is a protein that assimilates very quickly, and will get to your muscles within 10-15 minutes of swallowing it, supplying your muscles with the right food at the right time to stop the catabolic process in your muscle and shift the process toward repair and growth.