Is it time for new padel shoes? Should you own more than one pair of padel shoes? Just which padel shoes should you buy anyway? Since your shoes are the only thing that comes between you and the court surface, they’re pretty important.

If you’ve been shopping for padel shoes lately, then you know – there are tons of options out there. New manufacturers are getting into the court shoe game pretty frequently now. I dropped by my own local padel retailer this week just to buy some overgrips for my racket. Next thing I knew, I had been lured into the shoe department by all of the pretty colors and fancy designs.

The Importance of Your Padel Shoes

Why is it important to wear padel shoes?

I often see players wearing running shoes to play padel. And I bet a lot of you do too. And if you’re one of those players who feels most comfortable playing padel in running shoes, I certainly do not have a problem with that. I think you should play in whatever makes you feel like you’re playing your best padel and if it happens to be running shoes that make you happy, then that’s what you should wear.

But for the vast majority of us, it’s pretty important to wear court shoes. That is, to wear shoes that are specifically designed for padel. This is because these shoes are made to give you the support, the cushioning and, most important, the traction that you need on a padel court.

We all know that padel requires, not just a lot of running around, but it requires that you make quick starts and stops, it requires a lot of lateral movement, and so padel shoes are made to provide you with exactly the type of support and cushioning that you need in these situations. And the traction that you need on a padel court is certainly much different than you would need if you were running, even if you’re out running on a road, because you do have these short starts and stops, quick steps, small steps, longer lunging steps, and so a padel shoe is really made to provide you with the best possible shoe for those special situations.

Parts of the Padel Shoe

Now, padel shoes, just like any fitness shoe, have a lot of parts to them. There is a lot of lingo that surrounds padel shoe anatomy. But I don’t think we need to know every bit of that lingo to make good decisions about padel shoes.

So the purpose of the outsole is to help provide you with that stability and traction that you need. While the midsole is usually where you’ll find some of the cushioning that you get on court to help make the shoe as comfortable as possible.

Characteristics of a Padel Shoe

According to experts and professionals a shoe must be primarily able to provide good grip to the track to provide traction as you start moving, a certain degree of slippage when you stretch on for long balls and lastly, allow you to make turns with ease to avoid any damage to the knee and ankle joints.

Padel shoes usually have a full herringbone pattern going across the outsole and this is to help grip into the sand and artificial turf that lies beneath your feet in a padel court. There is also normally quite a bit of lateral support in the upper part of the shoe because so much more sliding is going on.

How Often Should You Replace Your Padel Shoes? 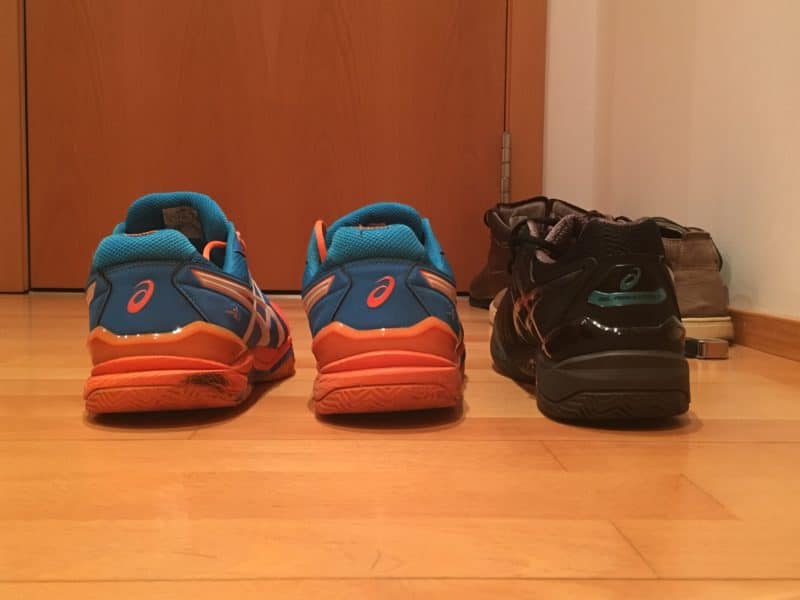 How often should you be buying new shoes? How do you know when it’s time to replace your padel shoes?

Well, one way you can tell is, if you’re like me and you spend at least a few hours of every day in padel shoes, you know it’s time to buy a new pair when you see a new pair of padel shoes that you think are cool. I have four pairs of padel shoes that I rotate through right now. They’re all the same two models of shoe but all different colors. My recommendation is not that everyone should constantly be buying new padel shoes. But I feel like I wear them enough that I keep several pairs in rotation. I had also been given the advice to play in different shoes so that the strain on the foot is not always the same, which is supposedly healthier for your feet.

If you’re just interested in knowing when it’s time to change your one pair of shoes, what you need to do is look at the bottom of your shoe. Look at that outsole. If you notice that the outsole is starting to wear away, so that you can now see the midsole, the layer under the outsole, that tells you that the traction on your shoe is starting to lose some of its depth. You are not going to get as good of a grip out on the court and it may be time to go get a new pair of padel shoes.

And you will of course notice that the bottom of your shoe is going to wear differently depending on the location of where you’re looking at as well as between your two feet.

So if you look at the bottom of your shoe and you notice that the outsole is starting to wear away, then you need to start thinking about whether it is time to buy a new pair of shoes. I’m not saying that if the toe is wearing away, run out and buy new shoes. But just be aware that it may be getting close to time to do that.

There is a rule of thumb on this and it is that, if you play padel 2 to 3 times a week in one pair of shoes, you probably need a new pair of shoes about every six months. But that is just a rule of thumb and your experience may differ. I see a lot of padel players (especially those who previously played tennis) use a lot of sliding movements on court, and that will wear out shoes faster.

To conclude, the easiest way to know if it’s time to replace your shoes is to look at the bottom of your shoes and judge what is going on to help you make the decision whether it’s time for a new pair of padel shoes. Also look at the sides of the sole and see if there are the typical heavy creases especially on one side more than the other (depending on how you pronate your feet) which would mean that the sole is no longer able to give you that comfortable bounce and absorb the shock of each movement.

Changing shoes is definitely not just a question of being stylish but rather keeping your feet healthy. They are going through a lot of abuse with all your moving around daily on a padel court, so you need to keep them as protected as possible. In fact, I also make sure to always wear my custom insoles. Most cities will have specialised centers that deal with insoles. I got mine at Podoactiva in Barcelona, they’re the ones who designed the insoles of top athletes such as Lionel Messi and the best padel player Fernando Belasteguin.

Sometimes it can feel like a pity to throw away shoes that still seem to be usable, so in order to better judge I always keep a new pair of identical shoes in store, and when in doubt I’ll try the old pair and then the new pair, and if I can notice a significant difference in comfort and support, then I know that I’m probably damaging my feet and hampering my movements on court if I’m wearing the old pair, and that’s what makes me comfortable to replace them.