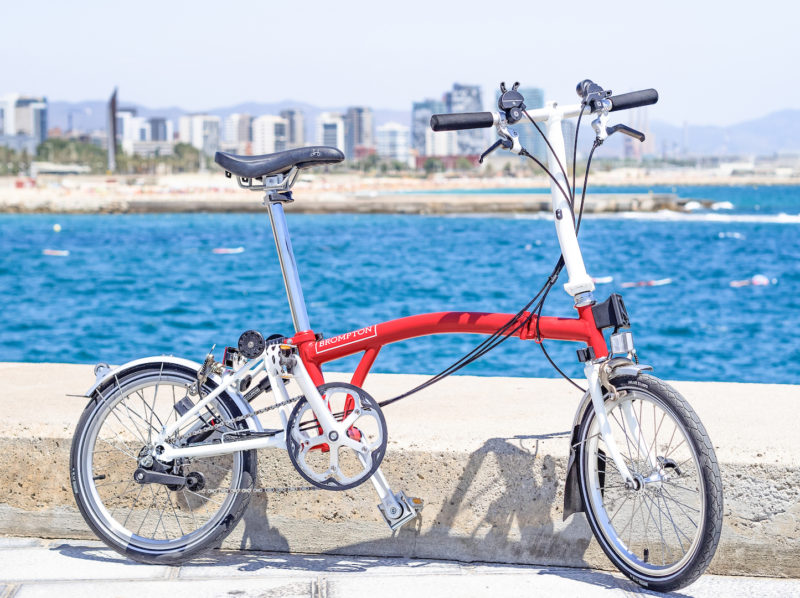 Barcelona is quite a bike-friendly city. The number of bike lanes is always on the increase, and in general, drivers are quite conscious and respectful of cyclists, although you find exceptions.

It is also a city that is plagued by comparatively high levels of air pollution, and even higher noise pollution due to the exceedingly large of obnoxiously loud low-quality scooters and thanks to the population’s obsession with diesel-powered vehicles.

It, therefore, makes sense to fight back against this harmful environment by promoting bike usage. For commuting within Barcelona, I typically use my Brompton 6-speed bicycle. Brompton is hands-down the best brand for foldable bikes and you’ll see many Bromptons in Barcelona.

There are a number of stores selling them including an official Brompton Junction store. Folding bikes are ideal as they are easy to store in an apartment and very easy to transport, be it in a car/train for a day trip outside the city, or just carrying it into a store, bank, office etc.

If you don’t want to buy your own bike, you can rent a bike for specific journeys. Many people use the rental services for their daily commute to work or wherever they need to go within the city. Many times it’s the fastest means of transport.

Since there are worrying levels of pollution, I would recommend wearing an air filtration mask. I use one especially in winter since my nose gets watery in the cold wind and thus the face mask helps eliminate that issue too. In summer I don’t really use it much since it gets stuffy, although if I were commuting during the rush hour on a daily basis I would definitely use it all year round.

To stay safe while cycling, you should use the bike lanes whenever provided. Wearing a helmet is not proven to make cycling safer (further details below), so I would only recommend it if you’re going to be doing high-speed commutes (for example going downhill from the higher parts of the city and not using bike lanes).

You should always quickly check your bike before riding out (brakes, gears and tire pressure). Wearing gloves can help you get a better grip during the cold winter weather as well as the summer months when your hands can get sweaty. Also, make sure to wear bright and reflective clothing during low light conditions and always use lights on your bike to help you stand out as well as light up the road right ahead of you.

Make sure you abide by the rules:

When you share the road with other vehicles, try to use the lanes nearest the pavement. You can cycle in the middle of the lane. Give sufficient warning before overtaking or changing direction. Obey traffic lights and signs, and respect zebra crossings. Remember, bicycles are just another type of vehicle.

You cannot cycle in bus lanes if this is not explicitly allowed and signposted.

In general, cycling is not allowed on the pavement. But you can do so when there is no area set aside for cyclists (cycle lane or 30 kph bicycle street) and the following conditions are met:

Bicycles can travel in either direction in pedestrian streets and residential streets with a speed limit of 20 kph, provided they have a single-level surface and there are no signs prohibiting cycling.

When the cycle lane is on the pavement, pedestrians have right of way when they have to cross the lane. You must reduce your speed when going over a zebra crossing, to avoid possible conflict with pedestrians, and take the necessary precautions when you do so.

When there is a cycle lane on the road, cyclists will have right of way over motor vehicles, including where the latter attempt a right or left turn that would block the cyclist’s path.

Pedestrians may not occupy, walk or remain in cycle lanes and when they are crossing one, they must respect cyclists’ right of way, except in places designated for that purpose, such as zebra crossings, which specify right of way for pedestrians.

Whenever you cycle in areas reserved for pedestrians:

Should You Wear a Helmet When Cycling? 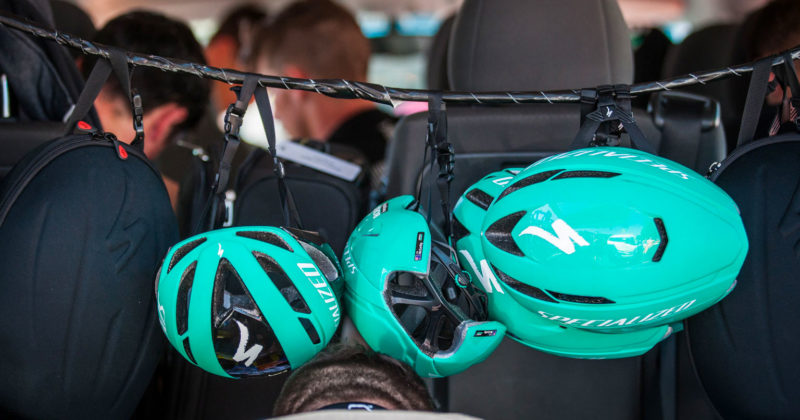 I’m very safety conscious in general, and so I always liked the idea of wearing a helmet when cycling. However I recently came across a few articles that made me think twice.

If you’re a cyclist, read through these two pages:

My take is that if you live in an area where motorists are well aware of cyclists (e.g. Amsterdam), and there might be potential obstacles that can snag your helmet, you’re probably better off without it. If, on the other hand, you live in a place where car drivers basically hunt cyclists (e.g. Malta) you’re better off wearing as much protection as you can. The same goes for competitive cycling anywhere. A fall at high speed will always be more dangerous if you’re not wearing protection.

In general, we need to keep working towards more bicycle awareness and creating more bike lanes (Barcelona is doing a great job at this), while also designing car traffic routes in a way that reduces potential crashes with cyclists. For example, while Barcelona is always increasing the number of bike lanes, there are some areas that are real death traps.

The most common ones involve a green light for car traffic to go straight or make a 90 degree right turn, while the bike lane on the right hand side runs straight on. Around 80% of the time I ride through such bike lanes, I have a lorry or car turn onto me by mistake. While the drivers lack awareness in such cases, the way the traffic system is designed certainly exacerbates this problem.

Do you have any other tips for riding bikes in Barcelona or other big cities?