As a WordPress veteran, I’ve observed the fluctuations in the ecosystem for many years now. I’ve also written about my thoughts on the current state of things at various points in the past, but today I want to focus on that again with an eye on the future. I’m going to say things the way I see them and the way I think they are in this article; feel free to disagree in the comments section if you think I’ve got anything wrong.

First, a Bit of History

I’m going to start with some historical context as I feel that it’s very important when thinking about the present state and future possibilities.

Over the past twenty years, we’ve seen a significant shift in the way people use and perceive the internet. In the early days, the avenues of the web were synonymous with freedom. For the first time ever, we could make our voice heard by the world wherever and whoever we were. The creation of tools like WordPress was essential in allowing users to publish their content. Users didn’t mind taking some time to understand the technical part of things, such as downloading the WordPress software, installing it on a server, setting up a domain etc.

Nowadays, the internet looks quite different. Users have gravitated towards centralized platforms that provide an easy-to-use interface for creation, and an audience too. They’ve been seduced by the slick interfaces and addictive nature of many social networks and platforms, and have long-forgotten ideals about decentralization and open-source software.

This is the present that WordPress finds itself in today, with competitors like Wix, Squarespace, Shopify and Webflow, all of which are centralized platforms for creation. WordPress has the biggest market share, helped by its tremendous growth over the past two decades and its first-mover advantage (all other platforms launched many years after WordPress). But the challenge going forward is to keep its position while faced with these formidable competitors.

Now, I want to spend some time describing all the components of the WordPress ecosystem.

Matt Mullenweg is the co-founder of WordPress, together with Mike Little. Matt has been the leader and figurehead of WordPress since its founding in 2003, and has become a billionaire through Automattic, the company he founded soon after he launched WordPress.

Matt makes his investments in other companies through Audrey Capital. Through the success of Automattic, he’s been able to go on and invest in many other interesting companies, a list of which is on the Audrey Capital website.

Automattic is a company founded and run by Matt Mullenweg, who is also the co-founder of WordPress. It is still private but has done several funding rounds and is currently valued at around $8 billion. Yes, you read that right.

Automattic now owns various web products, such as Tumblr and Day One, but the company made its money through WordPress.com. 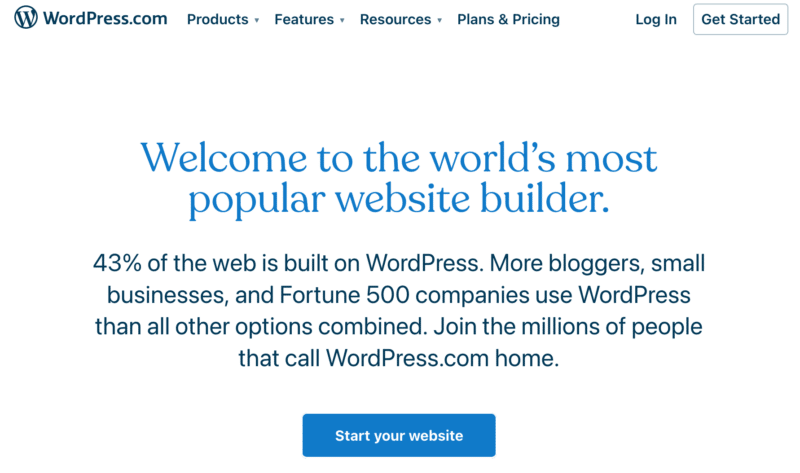 The first point of confusion for any prospective WordPress user is the differentiation between WordPress.com and WordPress.org.

WordPress.org is the site that hosts the open source software known as WordPress.

WordPress.com is the hosted version of WordPress and is run by Automattic, a company founded by Matt Mullenweg, also a co-founder of WordPress.

WordPress.com has become very similar to the other centralized systems that I mentioned previously (Squarespace et al) and is obviously a big money maker for Automattic.

Here we start seeing how things are twisted to the benefit of the commercial side of WordPress (making money for Automattic). Note how the screenshot above raves about the “millions of people that call WordPress.com home” and makes no mention of the fact that the majority of those are using WordPress the open-source software not WordPress.com, the hosted version.

WordPress.org is where you can download the open-source WordPress software. It’s also the de-facto home of the “WordPress community”, and you will find the forums, plugin and theme download pages, etc there.

WordPress plugin and theme developers are what made WordPress grow into the behemoth it is today. They built upon and extended the functionality of WordPress in a bazillion ways, turning WordPress into by far the most flexible publishing software on the planet.

The only real alternative to WordPress if flexibility and extensibility is your main goal, is to build your website from scratch using custom code or a coding framework as a base. If you’re not a developer or don’t have the means to hire one (or an agency) then WordPress is your only feasible choice. All you need to do is pay a few hundred dollars to acquire the set of plugins that you need to concoct whatever flavor of website you desire.

By WordPress Users, I mean individuals or companies that are using WordPress to power their websites. This group numbers in the millions.

These are companies that build web solutions for their customers using WordPress. They are typically not that interested in WordPress as a project beyond it being a means to an end. Some are more invested in WordPress and even create and sell a few plugins of their own.

The Current State of WordPress

In 2022, I’ve seen WordPress reach a peak of negativity among plugin developers, mostly due to the fact that they have always been underappreciated by WordPress leadership. Towards the end of the year, the WordPress powers that be suddenly removed the install growth charts from the .org repository without any real explanation. When questioned about it, Matt, Otto (one of the lead devs) and JJJ (another developer close to the core team) offered conflicting reasons, leading to even more speculation and outrage. Plugin developers were adamant about wanting the feature back as it is essential to them in monitoring how their plugin is performing in the market, but there was no real sense of caring from Matt and the core team.

For many years now, those who have been working in the space for a long time have felt that WordPress is an ecosystem that is run by one man, Matt, acting as the dictator. He has been sometimes referred to as the “benevolent dictator”, but his sense of judgment and benevolence is being questioned more and more as time goes by. The close circle of people high up in the WordPress hierarchy has also fallen out of favor, again mostly due to their dismissive and entitled attitude. There is certainly the sense that WordPress is far from an open system when it comes to the major decisions taken.

Web developers in general tend to hate WordPress due to their perception of it being bloated and badly coded. While there is a strong element of truth there, the codebase has changed a lot over the years, moving from being almost 100% PHP-based to being more of a JS-based system. The attitude, whether justified or not, still prevails, and most serious developers prefer using a cleaner framework like Laravel for their projects. This makes it harder for WordPress companies to hire competent developers.

WordPress agencies are having a good time, since the popularity of WordPress with end users doesn’t seem to be waning, in fact it is reportedly still growing year over year, although there are some debates around that statement as well.

WordPress as a system has definitely enjoyed much better years as regards to reputation, but it is undoubtedly the case that there are still millions of sites running it and many new sites popping up every day, so agencies have no worries about finding new clients.

Enterprise-focused agencies are a niche on their own, dealing with their own trials, as Magne from Dekode can attest. However, it is also true that their business is doing well and also growing, so along with agencies doing work for mom-and-pop shops and small businesses, this is a good niche to be in.

What about the end users though? These are by and large the biggest part of the WordPress ecosystem. For end users, there still isn’t much of an alternative to WordPress if they are the DIY types and have a very specific type of site they want to build. The lack of alternatives stems from the fact that WordPress is the only system out there to have so many plugins. Sure, end users can choose Squarespace, Wix, and the rest of the hosted systems out there. They offer a slicker experience and better UI, but they will always lack in features and flexibility compared to WordPress.

On the other hand, end users are also frustrated by moves that have been imposed on them by Matt and his cronies over the years. Gutenberg is a glaring example, and a look at the reviews will tell you all you need to know.

Again this is an example of Matt being an absolute dictator and shoving his wishes down everyone’s throat. Here’s one of the recent reviews at the time of writing this article:

No one step set WordPress back as far as this one plugin and set of features has. Now with the infiltration of Gutenberg modules into the official WP code contributions represents a devolution and corruption of WordPress principles, a rotting of it to the core. As an avid long term fan and developer of WordPress for 12+ years, nothing comes close to Gutenberg in how much it’s damaged the functioning and operation of WordPress, adding needless complexities to the user and developer experience, adding no tangible upsides, and breaking the long upheld principle of backwards compatibility. This plugin and mostly its integration into the WP core is a disaster and has damaged WordPress as a whole.

I know many WordPress plugin and theme business owners who have totally given up on WordPress and exited the space altogether. Typically, they have sold their businesses to a bigger plugin company like Awesome Motive, or to hosting companies that are trying to emulate the hosted environment provided by WordPress.com.

Others are still trying their best to survive within the changing WordPress ecosystem, although the way I see it, things are not looking great going forward.

I’ll end with a question – What’s next?

For users who have become frustrated by the complexity of WordPress and the janky experience, will they move to a service like Squarespace, Substack, Wix or Webflow? Will they wake up to the abusive pricing strategies by some WordPress plugin sellers and the overall horrible experience of having to pay subscription fees to several plugin suppliers to keep their website running year after year?

For the plugin developers who are seeing their chances of success within the WordPress space trending towards zero, what are the alternatives? Shopify is one platform that is becoming more and more attractive, as it opens up the possibilities for developers extending the core functionality and building significant businesses around that model.

I welcome your comments and discussion.