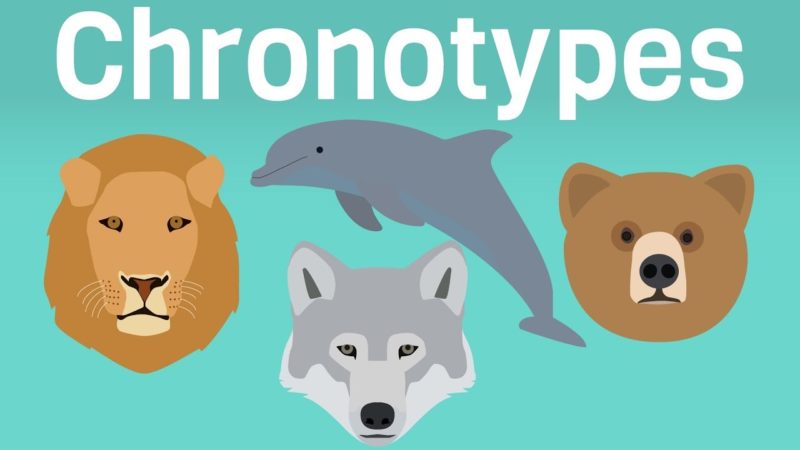 I learned about chronotypes from sports sleep coach Nick Littlehales. While I’ve never had much trouble sleeping, I have struggled on and off with going to sleep and waking up at the right times.

Your chronotype describes your sleeping characteristic – whether you’re a morning person or an evening person. Chronotypes are genetic traits and are usually easy to spot.

Do you like staying up and going to bed late? Do you need and alarm to get you up for work in the morning? Do you often skip breakfast? Do you sleep in on your days off? Then it’s likely that you’re a PMer.

AMers wake naturally, enjoy their breakfast and love the mornings. They tend not to need an alarm to wake them, they’re less likely to feel fatigued during the day and they go to bed reasonably early.

There is a third category of chronotype – the inbetweener. Many of us genuinely are in-between, but almost all of the population live their lives as inbetweeners, regardless of their real chronotype.

To find out your chronotype and optimize your schedule around it, you can take the Chronotype quiz.

My result was Lion and it certainly corresponds to my observed energy levels. Over the years I’ve figured out that my best wake-up time is between 6 and 7 am. In practice, most days it’s closer to 8 am, since life in Spain is geared towards late evening and nighttime activities, meaning I go to sleep later.

I’ve also given myself the liberty to sleep as much as my body requires, and it invariably falls between 7.5-8 hours. Afternoon power naps or siestas help me a ton to give me a fresh boost of energy for the evening time, and they do not affect my nighttime sleep at all. I’m not that sensitive to caffeine intake either, so I make use of coffee during the day quite liberally.

I try to sleep between 11 and midnight, anything later and I’m into my red zone and it will affect the following day negatively.

Another supporting piece of evidence for me was the Wake-Up Time trait from my 23andme report, which again shows that I’m very strongly a morning person. 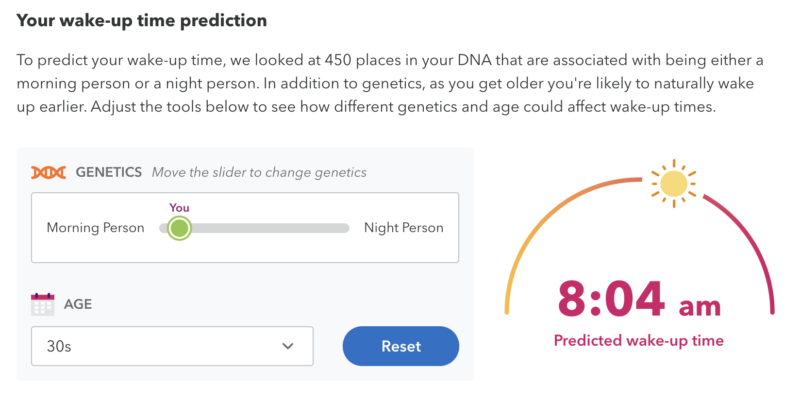 To compensate for less than 8 hours of sleep on certain days I’ll take a (coffee-fueled) power nap in the afternoon.

Why is it important to know your chronotype?

If we were left to our own devices, to get up and go to sleep whenever we wanted, to wake naturally and start work at a time of our own choosing, it wouldn’t matter hugely. But, strangely enough, working cultures have yet to develop with this in mind. Whether you’re an AMer or PMer, you still have to get to work for 9 a.m., you still have to be at training in the morning if you’re a football player, and in this instance, it’s the PMers that suffer because they are effectively trying to operate in a different time zone to their internal body clock. This is known as ‘social jet lag’.

Because they naturally get up earlier, AMers tend to get tired sooner and go to bed earlier too. This means that, when morning comes around, they will have enjoyed plenty of restorative deep sleep and so will be in a lighter sleep state as they approach their wake time. They often won’t even need an alarm.

PMers, on the other hand, will push on later at night, meaning that when morning comes, the alarm often needs to rouse them from an earlier part of sleep (only for the snooze button to be hit repeatedly), and they will spend the rest of the morning playing catch-up. A PMer is likely to lean on caffeine to do this.

For a PMer, daylight on a morning is vital if you want to set your body clock to play catch up with the AMers. Get a dawn-wake simulator, which recreates a sunrise in your bedroom to wake you up, from a reputable brand such as Lumie or Phillips; open the curtains, go outside.

The bad news for PMers is that you should cut out the lie-ins at the weekend too. If you spend all week adjusting your body clock to the demands of your job, then let it all go at the weekend, your clock will drift back towards its natural, slower state, and you’ll be starting over come Monday.

Offices and workplaces should take this more seriously. Instead of having desk hierarchies where the more senior people get the window seats, allocate them to the PMers struggling through their morning and the AMers for their afternoon. Investing in daylight lamps will help both the AMers and PMers conquer their respective difficult parts of the day and increase their productivity, especially in winter, when there is less light.

It’s not all bad news for PMers. They have a natural advantage not only when it comes to enjoying nightlife, but also when working shifts. An AMer nurse working night shifts in a hospital would equally be in need of daylight lamps to play catch-up with their PMer colleagues. The most important thing for either chronotype to find is some harmony with their environment.

For example, an AMer might live with his partner, a PMer, and they both have to leave for work at 8.30 a.m. He gets up and 6.30 and she gets up at 8, but, of course, every time he gets up on a morning, he disturbs his partner. She goes back to sleep, and imagines it’s doing her good, but in reality she’s flitting between wakefulness and sleep.

But what about a compromise that could be made? They both get up at 7 instead, which is a big shift for her, but the AMer makes the breakfast and gives the PMer the space to sit in daylight, to reset her body clock and wake up naturally. It will take a bit of adjusting to, but all of a sudden the couple are working more in harmony. When the evening comes around, it is the PMer’s turn to do her bit, maybe cooking the dinner or doing the washing-up later, when the AMer is tired.

If you’re an AMer, you know you’re at your best in the morning, so you can plan your day to take advantage of this. Let’s say your job involves managing your company’s social-media accounts, some bookkeeping and a lot of communication, but also some of the more mundane realities of office life such as taking the mail to the post office and filing. Presuming you have a bit of freedom in the order in which you do things, you could manipulate your schedule so that you compose all your tweets and press releases in the morning, everything that requires you to be at your most alert, then spend your afternoon taking the post out and doing filing.

Often there isn’t this kind of freedom in our daily work, and sometimes a job to write a press release or something similarly requiring of thought will land on your desk in the afternoon and it has to be done right at that moment. But where we’re able to, instead of spending what feels like forever on getting something done in the afternoon, wondering why it’s taking so long,  just stop and have a think about it. If you’re struggling with it now, come back to it in the morning, when you’re fresher and more alert. It’s the same philosophy with PMers.

What’s your chronotype? Has it helped you achieve better performance?