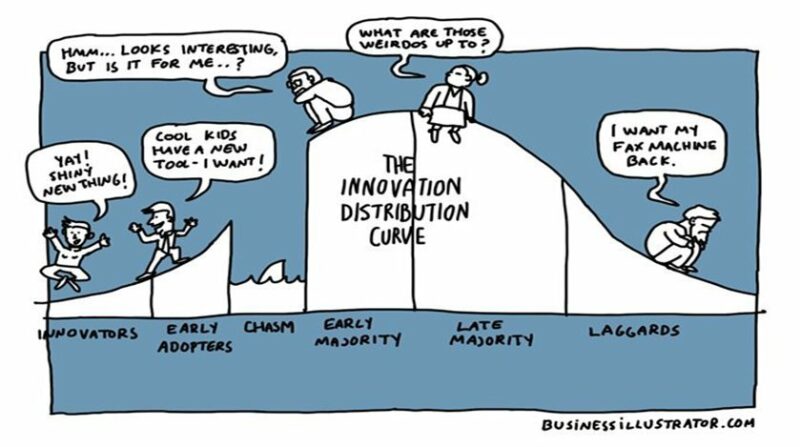 Over the years I’ve come to realize that my best investments happen during the second wave of the product or industry lifecycle.

The idea is loosely based on the Gartner Hype Cycle curve, the No products found. concept, the Hero’s Journey and the theory of Diffusion of Innovations. Let’s take an abbreviated at these models that have inspired my strategy.

This style of investing is also driven by the fact that by nature I love being somewhat of a contrarian, and am quite unlikely to invest in something when it’s in hype mode and everybody is getting in on it.

Two roads diverged in a wood and I – I took the one less traveled by, and that has made all the difference. — Robert Frost

So let’s take a closer look at the concepts and models that have (mostly at a subconscious level – I rarely feel I’m being very methodical with my strategies) been framing my investment decisions over the past few years. 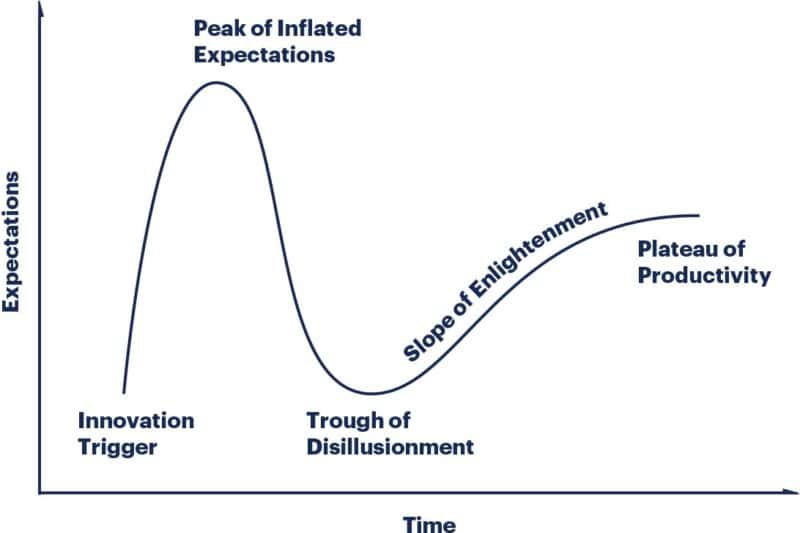 The Gartner Hype Cycle aims to visualize the typical path that most new technologies go true until they reach mass adoption.

In the Gartner Hype Cycle, we find 5 main stages for a new technology:

I’m most interested in the 3rd and 4th phases. Let’s see how they’re defined by Gartner:

Now let’s take Bitcoin as an example. Perhaps it is a bad example as the whole cycle has not yet played out, but it’s the best example I have right now. After the 2017-2018 peak that crypto went through, there was a bit drop in both asset prices as well as media coverage and public opinion. Clearly we hit the “trough of disillusionment” at that point. In the meantime, nothing changed for the builders in the Bitcoin space, and that was an amazing time to get interested in the technology and educate yourself as well as get invested.

Investing in Amazon after the dot com bubble is another example of second-wave investing in the trough of disillusionment. 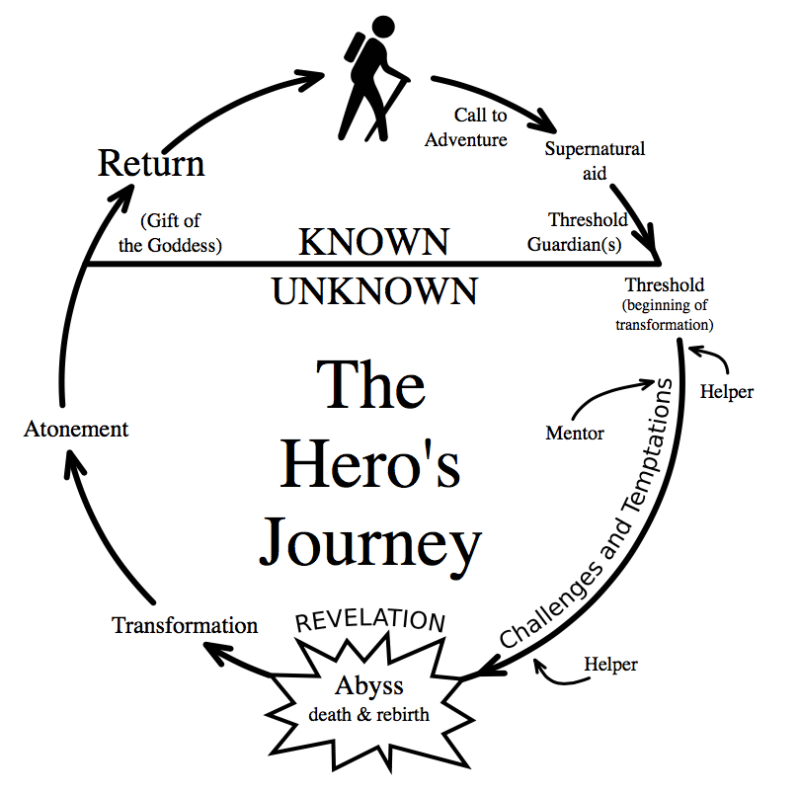 This monomyth is not typically used in relation to new technology lifecycles, however, I think it also fits in quite well, especially as I consider my own personal journey with new technologies.

Humans react to great story-telling because we are programmed to respond to an elemental story arc. The Book of Jonah, The Odyssey, Rocky or Star Wars: the details don’t matter because although the contexts are different, the story is the same. They appeal to the masses because of our deep desire to progress from the mundane, fight through challenges and then achieve a great victory.

Taking Bitcoin again as my example, it started its “call to adventure” as a result of the financial crisis of 2007-2008. It then went through its own challenges and temptations, with the scaling wars that lasted a couple of years, as well as the Abyss of 2020 (huge drop in price) and the rebirth and fast adoption by both public corporations, institutional funds and even countries.

The “crossing the chasm” model is based on the theory of diffusion of innovations. This is a theory that seeks to explain how, why, and at what rate new ideas and technology spread. It was Everett Rogers, a professor of communication studies, who popularized the theory in his book “Diffusion of Innovations”. He argues that diffusion is the process by which an innovation is communicated over time among the participants in a social system.

In most product adoption curves, there’s a point that can make or break the success of the product. It’s called the chasm. It’s the point between the early adopter stage and the early majority stage.

As the chart above represents, crossing the chasm means breaking into the mainstream market.

Again, with Bitcoin, I believe that as of 2021 we are just beyond the chasm, or possibly on the way to crossing it the final part of it. I’ve long held the belief that in order for Bitcoin to be successful, it would need to be properly regulated and also adopted by big institutions and possibly even countries.

Over the past few years, we’ve simultaneously seen governments and regulators all around the world take strong and detailed positions on the crypto space, as well as huge investments by public companies and even countries (El Salvador is the first).

We’ve also seen a tremendous amount of innovation in the crypto space, with the resurgence of the Ethereum VS Bitcoin debate as well as a ton of DeFi projects, NFTs, and most recently DAOs.

Having looked at those models and theories, I will come back to my simplified way of describing when I’m most likely to be interested in investing in a product or technology.

Let’s take a look at the first wave first and why I’m rarely that early.

In the very early stages the stakeholders and investors tend to be a mix of the following:

If you don’t possess one or more of those characteristics it is very hard to get in on something very early. Chances are you won’t even know the product or niche exists until the first wave has already passed. If you do happen to catch an early glimpse at the new technology, I feel that it will be an extremely time-intensive process to decide whether to invest at that stage, and even then, it would be a very risky investment.

Therefore, at the first stage, the risk-reward-work ratio is not worthwhile for me. To take an example with the internet, this first wave would be the 90s decade. Typical big risks, even though the technology would be wonderful, include:

Many products never make it beyond the first wave and there is a very real risk of your investment going to zero. Think ICOs in 2017, and Kozmo.com, Garden.com, Pets.com, Flooz.com, Webvan.com during the Dot Com boom and bust years.

Typically, during the first wave, a subset of people become immensely rich in very short periods, and they make the

Almost every new product or technology that gathers enough traction to become well-known then experiences a period of hype, and it is usually during this period (typically earlier rather than later since I read a lot) that my interest is piqued. However, rather than rushing in to invest along with the rest, I tend to go deep and isolate myself from the news and hype to truly understand the tech, the main players and ideas behind the technology.

By the time I have developed a decent understanding, the hype is usually gone, prices have plummeted and the technology is bordering scam or trash status in popular opinion. On the other hand, because I would have invested a lot of time into the subject, provided that I was convinced about the future of the technology, I would be pretty bullish myself.

That means that when there is the next growth phase (growth is much slower and almost imperceptible at first), I am able to go all in and take a sizeable position that looks like madness to most others who didn’t do their homework properly.

While some technologies or products fit this idea perfectly, others share similar properties but are not that easy to explain. For example, I feel that I entered the WordPress space back in 2006 at an excellent time. Rather than the product itself having been through an early hype cycle, however, it was the overall theme of self-publishing, blogs and website creation that had gone through it.

WordPress was the phoenix that emerged from the flames produced by the downfall of highly centralized products like Movable Type and the closed-source CMS solutions of the time. I had been creating websites and blogging for a few years already and I remember there being a peak of excitement about the “power to the people” idea of giving a voice to anyone to create a space online and publish their thoughts, closely followed by a deep sense of frustration with the expensive or inadequate tools available at the time.

When WordPress came along it ticked all the boxes for me and I immediately left everything I was doing at the time to focus on building things within that space, which proved to be a winning move over time.

What’s your take on the above? Let me know in the comments section below.